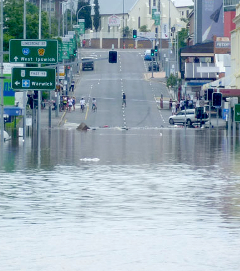 Hundreds have gathered to add their names to a list of thousands in a planned class action suit against the Queensland Government.

About 5,000 people have registered as victims of floods at Ipswich in 2011, which they say were caused by the mishandling of water from nearby dams.

A meeting was on in Brisbane this week for victims to hear from law firm Maurice Blackburn about the planned action.

The case is going ahead after receiving financial backing from international litigation funder Bentham-IMF.

“I think a lot of people have been waiting, frankly, to have the announcement that the matter is definitely going ahead,” Maurice Blackburn principal lawyer Damian Scattini said, suggesting more will sign on now that the case is certainly happening.

Flood victim Kym Kitchener said she felt someone should be held responsible.

“Things that could have and should have been done, weren't,” she said.

Ipswich resident Des Cave says he disagreed with the timing of the release of dam water during torrential downpour.

“I know flooding is one of those things that happens, but it can be managed a bit better than it was,” he said.

“Money's not a big thing... I just want to see that it is managed properly and that further down the track the situation doesn't happen again to the people.”