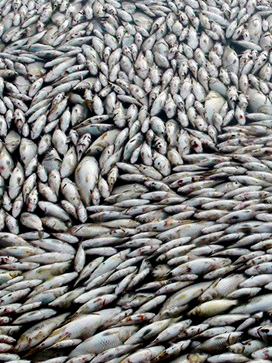 Experts say that the drying climate and water use has put the Murray Darling Basin at greater risk of fish deaths.

A research group from some of Australia’s leading universities has reviewed three significant fish death events in the Lower Darling River in late 2018 to early 2019.

The mortality estimates across the events totalled millions of fish.

The researchers say that the conditions for the mass fish deaths were created as far back as 2010.

An extreme hot and dry climate during 2018, extending into 2019, saw a large fish biomass, which had flourished in the Darling River and Menindee Lakes since favourable spawning conditions in 2016, isolated in weir pools, with no means of escaping upstream or downstream.

A series of sudden cool changes started mixing these layers and the result was a sudden drop in oxygen levels in the water and no escape for the stressed fish.

A lot of the factors that led to the mass fish deaths are still in place.

The authors say existing levels of water resource development coupled with a drying climate present a significant risk to the long-term health of native fish populations in rivers of the northern Murray Darling Basin in the future.