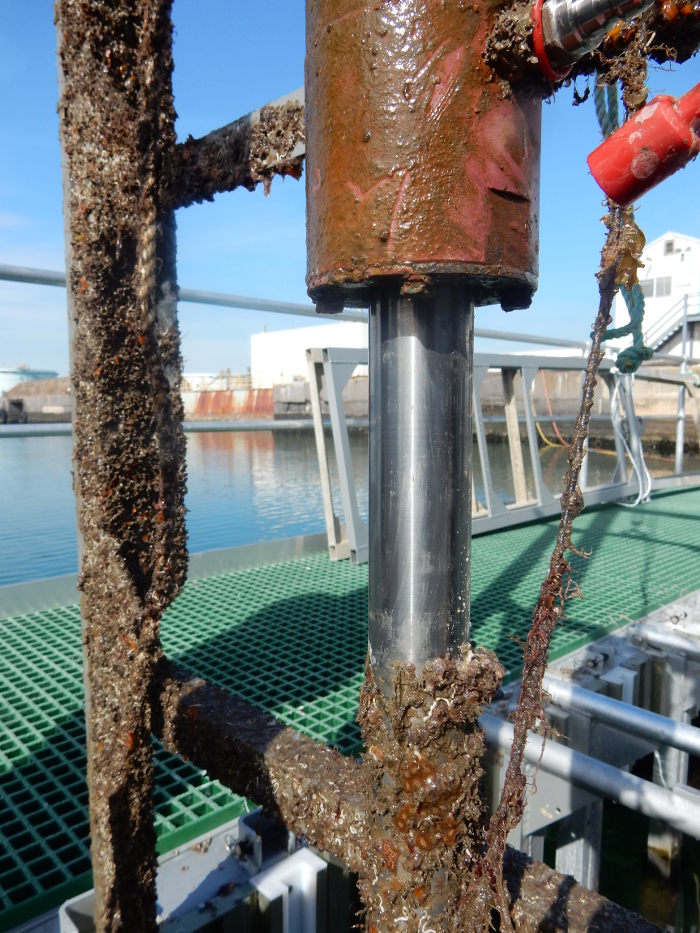 A new coating can cut the build-up of algae and barnacles on ship hydraulic components, according to tests on HMAS Canberra.

Researchers from Swinburne University of Technology are collaborating with experts from the Defence Materials Technology Centre, MacTaggart Scott Australia, United Surface Technologies and the Defence Science and Technology Group to advance the new technology.

The experts are trying to tackle the issue of corrosion and biofouling, where tiny marine plants and animals build up on the surface of things that are constantly in the water, such as ship hulls, anchors and piers.

This build-up can be incredibly costly, it can transport pest species to new areas, cause corrosion, damage critical mechanical components and increase the drag on a ship, causing it to burn more fuel as it sails.

“Many scientists around the world are looking for new ways to combat biofouling and corrosion,” says Dr Andrew Ang of Swinburne, one of the lead scientists on the team.

They are trialling the treatment (a single layer of carbide-based coating) on parts that require very smooth surfaces. Because these are exposed to harsh operating conditions, they rapidly degrade from biofouling and corrosion.

The treatment is likely to be too expensive to be used on entire ship hulls, but it could make a big difference for critically important machinery on a ship that helps provide propulsion or heavy lifting capabilities.

The team tested the protective coating on more than 100 test samples, immersing them in seawater at three field sites around Australia from 2015 to 2017.

Dr Richard Piola, from Defence Science and Technology, says the new surface coatings could make a huge difference to the operational availability of Navy ships, and significantly reduce the cost of maintenance and repairs.

“If the coating can double the length of time a ship can be at sea or available to be deployed—before it needs to be docked and cleaned—it could save costs and also increase operational readiness for the Defence Force.”

The team is now testing the protective coating on a prototype system in the field, and have been invited to conduct the trial on HMAS Canberra.