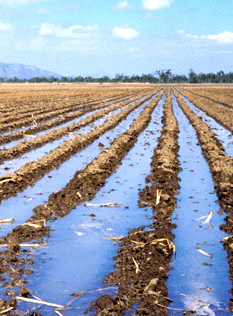 The release of millions in funding to help Queensland farmers save water has been welcomed.

Eleven million dollars will go out to six major irrigators across Queensland, with the money to be spent on infrastructure to improve storage facilities and boost irrigation distribution systems.

The Federal Government says the measures will eventually see some 3,128 megalitres of water returned to natural supplies. That figure is just a small part of Queensland's obligation to return 139 gigalitres under the Murray-Darling Basin Plan.

This round of funding will go to projects in the Balonne and Border River catchments.

“It's all about making irrigators more efficient in their water use,” said Parliamentary Secretary for the Environment, Senator Simon Birmingham.

“In doing so, we return some water to the environment while also paying a dividend to those irrigators in terms of extra water they can use from those efficiency savings.”

“This is part of the $154 million Healthy Headwaters Water Use Efficiency program run in Queensland.”

Queensland Farmers' Federation CEO Dan Galligan says it is a better way to use funding than simple water buybacks.

“Infrastructure is the right type of investment in this area, there's a lot of money still to be spent...making sure we do it in a sustainable way and I mean that economically, not just environmentally, is really critical,” he said.

“As this program rolls out, we'll see benefits in the region hopefully in terms of efficiencies and then the Government should be out there communicating...their future intentions on [water] purchases.”

There is $99 million more funding yet to be allocated, Senator Birmingham says.