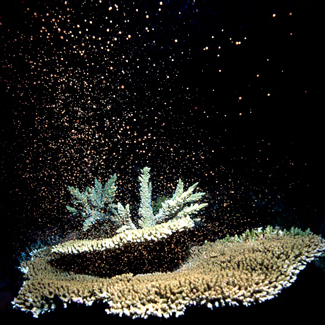 “Not all corals are created equal,” says researcher Ruth Gates from the University of Hawaii at MÄnoa.

“We will capitalise on those corals that already show a stronger ability to withstand the changing ocean environment and their capacity to pass this resilience along to new generations.”

Gates and he colleague Madeleine van Oppen from the Australian Institute of Marine Science (AIMS) have been awarded a $10,000 prize from Paul G Allen’s Vulcan Inc, and invited to submit a grant proposal for funding consideration.

A nearly $4-million, five-year project agreement was reached in June of this year, with research timed to maximise the peak coral reproduction season in North America.

“Paul Allen is deeply committed to ocean health and has a growing portfolio of programs targeted at the protection of marine life,” says Dune Ives, senior director of philanthropy at Vulcan Inc.

“This project uniquely addresses the need to reverse the rapid decline of our coral reef ecosystems.”

At the University of Hawaii’s Hawaii Institute of Marine Biology on Coconut Island, Gates and her team are working with a set of corals that were unaffected by a warming event last year that caused bleaching in many of their neighbouring strains.

These resilient corals are being conditioned to survive in increasingly warmer and more acidic water.

Gates refers to this as “training corals on environmental treadmills,” where the goal is to induce greater resilience in the individual samples as well as in their offspring.

They team hopes to build a bank of coral stocks that are preconditioned to withstand the warmer and more acidic ocean conditions of the future.

The Australian experiments will be conducted the state-of-the art National Sea Simulator (SeaSim) located on the campus of AIMS headquarters in Cape Ferguson.

The SeaSim allows for tightly controlled environmental factors including temperature and water acidity during the selective breeding-style activities.

The Australian-component of the research will use human-assisted evolution; a new way to use of the age-old selective breeding techniques.

“It accelerates the evolution of coral and with the rapid decline of coral health worldwide, the development of tools to help protect corals from stress is urgent.”