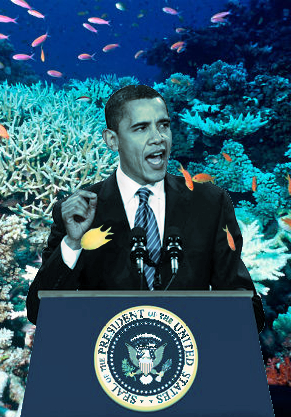 International fisheries may be the target of an assault by the United States.

US president Barack Obama says he will fight to protect US waters in the central Pacific Ocean and create a new strategy to combat illegal fishing.

The comments were made at a gathering of leaders from more than 80 countries, at a conference designed to unify scientists and industry experts on an action plan to clean up the world's oceans.

Mr Obama said in a video address that he wanted to “build a national strategy to combat black-market fishing”.

The US president is expected to use his executive power to push through laws declaring a large area of Pacific Ocean off-limits to commercial fishing or energy industries, the Washington Post reports.

“We all know how fragile our planet can be,” Obama said.

“Rising levels of carbon dioxide are causing our oceans to acidify. Pollution endangers marine life. Overfishing threatens whole species as well as the people who depend on them for food and their livelihoods,” he said.

“If we ignore these problems, if we drain our oceans of the resources, we won't just be squandering one of the humanity's greatest treasures, we'll be cutting off one of the world's major sources of food and economic growth.”

The moves have been welcomed by many in the US and international conservation and fishing arenas.

With recent reports showing between 20 and 32 per cent of wild-caught seafood in the US comes from illegal fishing, authorities say there is much to protect and fight against.

Obama plans were called “a historic step forward in the fight against seafood fraud and illegal fishing worldwide”, by the international advocacy group Oceana.

The Marine Conservation Institute said the US has raised the bar for fisheries and marine protection.

Hollywood actor and avid diver Leonardo DiCaprio said he would chip-in too, with his foundation pumping another $7 million over two years into projects to help the oceans.

DiCaprio says the rough state of the Pacific was highlighted to him on two diving trips to the Coral Reef near Queensland, 18 years apart.

“I've witnessed environmental devastation first-hand... what once had looked like an endless underwater utopia is now riddled with bleached coral reefs and massive dead zones,” he said.