Ocean-going gourd spotted across the Atlantic 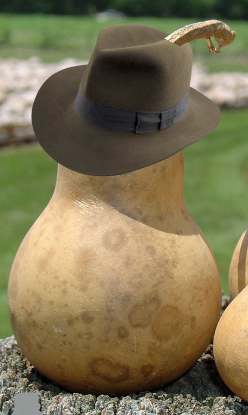 The bottle gourd has revealed itself to be a globe-trotting explorer, crossing the Atlantic Ocean several times to find work as a water-carrying device for early humans.

A study of bottle gourd genetics has shown they have an African, not Asian ancestry, and subsequent studies reveal the plant has actually made the journey in both directions.

Domesticated bottle gourds are common around the world in tropical and temperate areas. The handy plant is edible when young and makes an ideal lightweight water-carrying vessel when mature.

They have been found in virtually all areas either before development of ceramics or where ceramics ere never used.

“Beginning in the nineteen-fifties we thought that bottle gourds floated across the ocean from Africa,” said Logan Kistler, post-doctoral researcher in anthropology, Penn State in the US.

“However, a 2005 genetic study of gourds suggested an Asian origin.”

“The 2005 study looked only at targeted sequence markers that turned out not to be informative on the population level... [but] now we can do sequencing of the large single copy area of the plastid genome, which is about 86,000 base pairs of DNA,” Kistler said.

“The best explanation for this is that they came directly from Africa,” said Kistler.

“However, we wanted to test the possibility that gourds did float from Africa to form New World populations.”

Studies showed that gourds can float in the ocean and that after long periods of time in salt water, they still have viable seeds.

The researchers developed an ocean-current drift model that showed that wild African gourds could have simply floated across the Atlantic during the Late Pleistocene. When they arrived, large mammals like the mammoth likely helped naturalised populations establish in the neotropics, because these large mammals were known to eat various members of the family that includes gourds. The seeds are found in ancient deposits of large mammal dung.

According to the researchers, it is feasible that gourds did float across the Atlantic Ocean frequently. This is especially true of gourds growing near rivers that flow into the ocean.

Researchers estimated it would take at least 100 days to drift the entire journey, with gourds potentially surviving at sea for over nine months just to seek a better life in the Americas.

The full report has been published by in the Proceedings of the National Academy of Sciences.