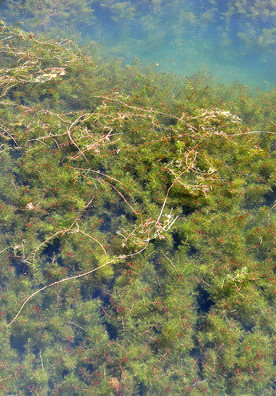 The chemical known as ‘endothal’ is being trialled in the Ord and other irrigation areas as part of efforts to have it approved for use in flowing water by the chemical regulator the APVMA (Australian Pesticides and Veterinary Medicines Authority).

OIC general manager Mat Dear says the irrigation community wants to move on from ‘acrolein’, the single chemical it has relied on for decades.

“There's really only one chemical in Australia that can be used in aquatic weed control in flowing water, and that's acrolein,” he told reporters this week.

“So we've only got one tool to use, and there's a risk in that, which we need to mitigate.

“Acrolein is also extremely expensive and has been going up [in price] by 5 to 10 per cent each year over the last few years, so we need to look at alternatives.”

Mr Dear said special permits had been obtained to test endothal in a couple of locations within the Ord Irrigation Scheme this year.

The trial will cover various concentrations of the chemical while experts assess its effect on algae and aquatic weeds.

It is particularly important to found out how the chemical performs in the warmer climate of the Kimberley.

“The first thing is to get these trials going, collect all of the necessary data to support the application [to the APVMA],” Mr Dear said.

“To have an extra tool in the tool box [for fighting aquatic weed] would be nice, and it would be great to have an alternative that works and potentially is something that's a little bit more cost effective than acrolein.”

Endothal is expected to be better for the environment and safer to handle.

The OIC currently conducts acrolein injections every month between April and October.