One Nation back on the boil, Hanson warns of water sale 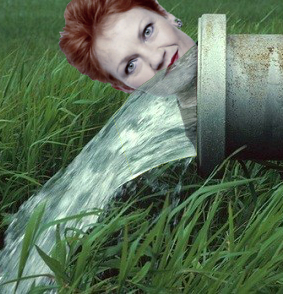 Pauline Hanson has re-launched her political party One Nation, and it appears that her number one priority this time is water.

In a break from her favourite topic of foreigners and the risks that they bring, Ms Hanson has this time tuned her rhetoric for the ears of Queensland farmers.

She said protecting the vital resource of water from privatisation would be a central point in her campaign for the 2015 state election.

Ms Hanson re-launched her old party at Caboolture on Saturday, and used her address appeal to farmers, saying she would protect them from alleged government plans to privatise water.

Ms Hanson warned anyone listening about the implications of ‘Agenda 21’ - a non-binding, voluntary action plan of the United Nations regarding sustainable development.

It was adopted by 178 countries at the Earth Summit in Rio in 1992, and Ms Hanson has not forgotten how threatening it is.

Her views match those of the US Republican Party, which has rejected Agenda 21 as “erosive of American sovereignty”, while the even more right-wing Tea Party believes it is a way for the UN to deprive people of property rights.

“They want to control water throughout the world, not in third world countries, but in western countries … and to privatise it,” Ms Hanson said in a video to her supporters.

“England and America have privatised their water and they are focussing here on Australia.

“I have had a phone call from a farmer in South Australia who is fighting this. He said; ‘Pauline, we have to fence our rivers and creeks and put meters on our dams. They are trying to control the water and we have to pay a fee’.”

It is not a conspiracy theory, Ms Hanson says.

“I have been on about this for years,” she told APN news outlet The Queensland Times.

“In South Australia the government is trialling low-flow bypasses, meaning that they don't want the water to flow to the dams.

“They want it to flow to the rivers and creeks.

“That is because the people who have bought licences for water are going to get the water and they are stopping farmers from putting dams on their properties.

“This is why it is important for me to be on the floor of Parliament so that this doesn't happen in Queensland.

“Australians must be informed about this.

“The privatisation of water is a huge industry and it is destroying our farming sector.”

Ms Hanson said the fight for farmers would be front-and-centre of her push to take over the state.

“What makes me so angry about this is that when we are in drought and the farmers are on their knees with foreclosures on their properties, they can't feed or water their stock,” she said.

“The Government comes forward and says; ‘We will bail you out’. But with what?

“They get $900 a fortnight and Barnaby Joyce says the farmers are getting a great deal.

“But that [money] just feeds the family because they have no income.

A full transcript of Hanson’s One Nation party launch speech is available here.