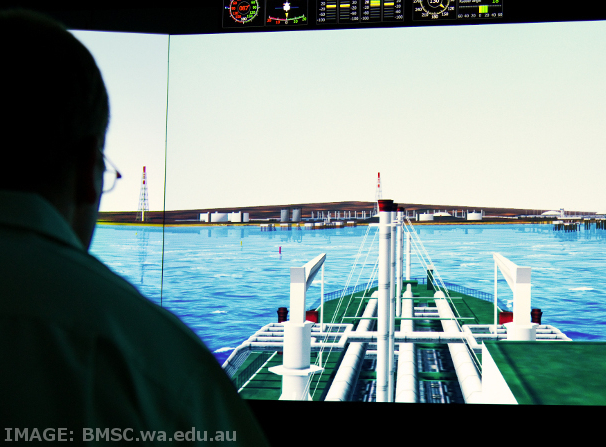 Engineers from around the world are heading to Broome to use a state-of-the-art ship simulator to test their designs for multi-billion-dollar ports.

The Broome Maritime Simulation Centre is decked out with recreations of the control consoles of everything from tug-boats to enormous inter-continental bulk carriers.

The simulator projects a 180-degree digital recreation of ocean and port infrastructure, so that designers can imagine what it would be like to captain a vessel through oceans and ports.

The simulator was originally built as a training tool, but soon found that engineering companies are willing to travel all the way to the Kimberly region just to test their plans.

Engineers input the size and specifications of ports into the simulator software, and can test almost all parts of a project, including specific wind, current and tide conditions.

“It's a fantastic facility to be able to demonstrate what a port would look like before you build it,” maritime consultant Steve Rabie told ABC reporters on a recent visit.

“We can help work out what size turning circles we need in regards to dredging, and that will affect the viability of the planned port, and how much it'll cost in the end,” he said.

“We can do a lot of stuff on paper and by manuals, but often they're conservative results, this is real-life simulation that allows us to optimise the design,” he said.

“It's an essential part of the process, and we find we can shave 20 per cent off the capital costs.”