QLD to crack down on threats to water-life 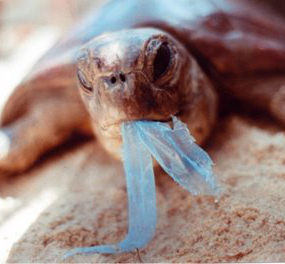 Queensland is considering a ban on single-use plastic bags for the sake of waterways and marine life.

The ban is among the more radical options being considered by the Queensland Government to reduce waterways’ pollution and the big toll it takes on marine life.

Environment Minister Steven Miles says there is more discarded rubbish in Queensland than in any other state, with figures showing litter levels are 40 per cent above the national average.

“Forty per cent of the small turtles travelling through the bay have been recently found to have consumed plastics and more than two thirds of the endangered loggerhead turtle,” Mr Miles said.

“All of us need to take some responsibility for that.

“Banning single-use plastic bags is one really practical way we can reduce litter and to help our turtles.”

Fishing line, nets, and plastic beads from washing detergent and plastic break-down can all get stuck in the gut of a marine creature.

The State Government has set up an advisory council ahead of public consultations later this year.

The council - featuring representatives from regional councils, the retail industry and conservation groups - will canvas the state to find new ways to help the vital and vulnerable coastal and marine species.

Other options include a cash for containers scheme to boost recycling rates.

“There's a range of different models that we could consider - one is a small fee for plastic bags, another is a deposit on bags,” Mr Miles said.

South Australia has a cash for containers scheme and a single-use plastic bag ban, and records considerably less plastic litter than other states.