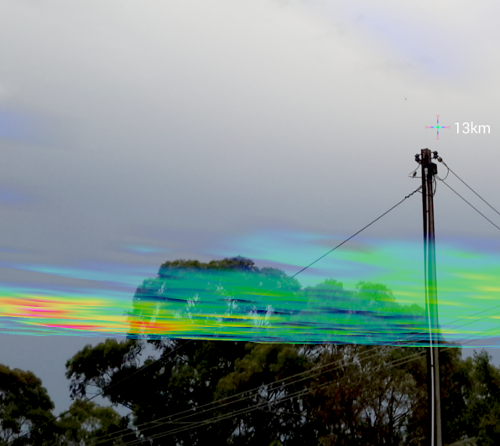 A research project from Flinders University has grown into one of Australia’s most popular smartphone apps.

Users hold their phones to the clouds and “see” areas where it is raining.

The app, created as part of a university assignment, made it to the top 10 selling weather apps within days of its release on the Google Play store last month.

“All you have to do is hold your phone to the sky and you can see where it’s raining and how intense the rainfall is, based on coloured indicators,” Mr Parsons said.

“It’s fully interactive so you can move your phone across the sky and see if the rain is increasing or slowing down in different directions.

“For people like cyclists, it’s really useful because rather than having to go to the bureau’s website then find the rain radar page, all you have to do is hold your phone up to the sky and look around.”

Mr Parsons said he has been “blown away” by the interest in the $2 app, which also features an animated display of previous radar images, a rain distance indicator and customisable settings.

“Within the first week I sold about 50 copies – I was shocked it had gone so well and is continuing to do so well.

“It’s certainly not going to put me into retirement at this point but there’s potential to make extra money from it.

Mr Parsons, a senior asset information analyst at SA Water, said he is now keen to find new applications for augmented reality technology, and credited his Flinders education for giving him the skills, knowledge and inspiration to pursue his passion.

“At SA Water I deal with pipe networks throughout the State, so one of the things we’ve been experimenting with is the ability to hold a smart phone to ground and see where the water mains are.

“Without the knowledge and inspiration I’ve gained through my courses at Flinders, I probably wouldn’t have got this far.”