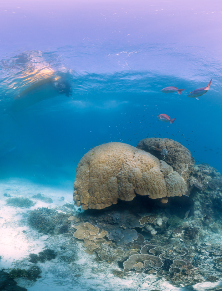 Australian scientists have found a record of a long-term climate pattern locked within layers of coral, which has shown that the Great Barrier Reef is influenced by more factors than previously thought.

Researchers from the University of Queensland have used UV lights to expose the luminescent “growth bands” on sections of massive coral colonies (called ‘bommies’) which are often hundreds of years old.

The bands match the timing of a little-known but seemingly influential phenomenon known as the Pacific Decadal Oscillation, which describes the 20 to 30 year cycles of warm and cool temperatures in the Pacific Ocean.

Lead researcher Dr Alberto Rodriguez-Ramirez says the lines provided a physical marker for the Pacific Decadal Oscillation, but also recorded flood plumes from central Queensland’s Fitzroy River at times coinciding with the oscillation patterns over the past century.

“We have demonstrated that this oscillation pattern is a key driver of river runoff impacting on the Great Barrier Reef,” Dr Rodriguez-Ramirez, from the University of Queensland, said.

“Our study suggests that this oscillation will influence the frequency and intensity of future extreme events such as floods – as well as ecological processes – in the region.”

The findings of a multi-institutional team have been published here in the journal PLOS ONE.

Co-author on the recent paper Professor Jian-xin Zhao, from UQ’s School of Earth Sciences, says it adds a new layers to models and predictions.

“This work shows that the region also feels the effects of the slower-moving Pacific Decadal Oscillation,” Professor Zhao said.

“This is a significant advance in our understanding of climate variability.”

Corals have been used in similar recent studies around the world, as they can often live for hundreds of years, all the while gathering environmental information and storing it as part of their natural aging process.

With some coral bommies reaching six metres tall and a few hundred years old, they are being used to provide much longer-term information than is available from satellite-based data, which goes back only a few decades.