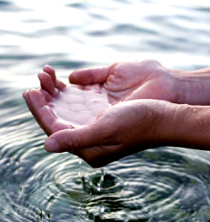 The Australian Water Association's latest State of the Water Sector Report says Australians will have to swallow recycled water in the future, with 87 per cent of industry professionals deeming it a suitable source of drinking water.

While there is plenty of concern about the mere notion of recycling and reusing water, a range of technologies exist which can produce a final product proven time and again to be safe for human consumption.

About two-thirds of the water professionals surveyed said Australia's water supplies and networks are well managed for now, but rising costs will be pushed up further by climate change, population growth and the need to replace outdated and expensive systems.

The report compiled by Deloitte from a survey of 1243 professionals found diversifying water supplies could offer the best security.

Chair of the AWA water recycling network committee, University of New South Wales associate professor Stuart Khan, says the inevitable need for change will run up against low public acceptance in some areas.

“The most likely scenario is that the next cities to move [to recycled drinking water] will be some smaller regional centres,” he told News Corp reporters.

He said the lower energy demands of putting recycled water back into the supply would even lead big coastal cities and capitals to reject the option of desalination.

Western Australia is setting up an “indirect reuse scheme”, where treated sewage is pumped into underground aquifers.

Dams were strongly supported by the water industry too, from 84 per cent of respondents saying they were an effective mean of managing water security in their region.