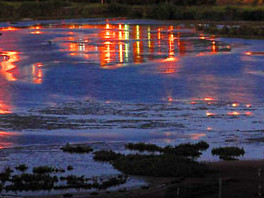 The spill on Sunday night could impact local marine ecology and damage vessels, the department says.

“Officers are continuing to investigate the exact amount of sodium hydroxide [caustic soda] spilled into the harbour, but initial reports suggests a loss of several tonnes,” it said in a statement.

“At this stage, it is believed that the most likely area for any impacts to occur is to the south of the QAL wharf, because the release occurred at high tide.”

A QAL spokesperson said the discharge happened during the unloading of the caustic material, and that the company notified authorities.

“Caustic is pumped from vessels into storage tanks through large pipes,” the spokesperson said.

“It is believed a portion of this flow has bypassed into the seawater flushing lines and into the ocean.

“The discharge was identified as part of unloading monitoring processes.

“The system was immediately shut off.

“Extensive monitoring of the harbour and downstream areas has taken place overnight and today and has not shown any signs of environment damage including changes to pH levels and impact to fish and ocean species.

“Caustic is used at QAL to assist in the extraction of alumina from bauxite.

“Caustic neutralises when mixed with seawater.”

The Department of Environment and Heritage Protection (EHP) says it will continue to work with other Queensland departments, relevant stakeholders and local governments to provide a thorough response to the incident.