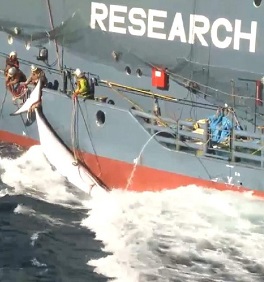 The US arm of Sea Shepherd will pay US$2.55 million dollars (AU$3.332 million) for breaching a court injunction and coming too close to a Japanese whaling vessel.

In 2012, the US Ninth Circuit Court of Appeals issued an injunction that forced Sea Shepherd to stay over 500 yards (457 metres) away from whaling vessels in the Southern Ocean.

In February 2013, the court ruled Sea Shepherd’s ongoing activities amounted to piracy, and were in breach of its injunction.

Sea Shepherd said in an official statement that it was a third party vessel that breached the court’s terms.

“Other foreign, independent entities that also use some form of the ‘Sea Shepherd’ name came within 500 yards of ICR's vessels during Operation Zero Tolerance,” the statement said.

Legal proceedings have continued since 2013, with Sea Shepherd USA petitioning the Supreme Court earlier this year, asking it to review the decision.

That bid appears to have failed, with Sea Shepherd agreeing to pay the US$2.55 million to the whalers in an out-of-court settlement.

Sea Shepherd board president Ethan Wolf said the group would pay the fine, but did not agree with the court’s finding.

It is understood that the fine will not be paid from supporters’ donations.

The money will go to the Institute of Cetacean Research (ICR) and Kyodo Senpaku, the main operators of Japan's scientifically-insulting whale ‘research’ program.