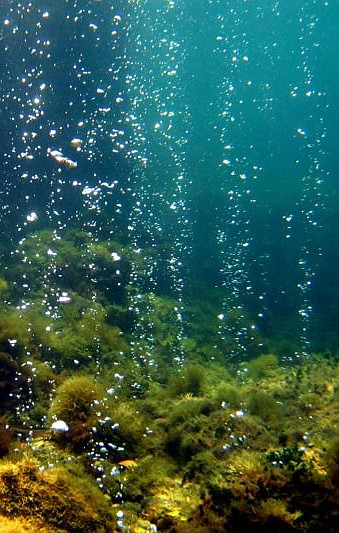 Researchers have analysed seaweed around volcanic seeps to assess their response to ocean acidification.

Dr Christopher Cornwall says his team focused on CO2 concentrations around the seeps because they are similar to those expected to prevail across the world’s oceans by the end of this century.

“Scientists had observed that some species of seaweed flourish around the volcanic seeps while others do less well, but they didn’t know why,” Dr Cornwall said.

“Our study has shown that the determining factor is the seaweed’s ability to take up carbon dioxide, and those species that are better able to absorb CO2 can be expected to benefit as ocean acidification levels rise.

“These include varieties of brown and green seaweeds that can be found on the Great Barrier Reef and around the Southern Australian coast.

“Conversely, increasing CO2 disadvantages calcifying species such as red coralline algae, which contain calcium carbonate that will dissolve with ocean acidification,” he said.

Chief Investigator Associate Professor Catriona Hurd said identifying which seaweeds would flourish and which would suffer as CO2 increases was important for both ecological and economic reasons.

“Macroalgae are the foundation of marine ecosystems, particularly in colder waters, creating food and habitat for tens of thousands of species of fish and invertebrates,” Associate Professor Hurd said.

“By identifying how seaweeds will change under different CO2 conditions, we can make predictions about the likely impact across entire ecosystems.

“For example, Australia’s brown kelp forests, which stretch along the Great Southern Reef from  Brisbane to north of Perth, are estimated to underpin more than $10 billion of economic activity in tourism and fisheries each year.

“If we can understand how the ecosystem may change we can start to look at how we may need to start adapting fishing practices or other activities now, rather than waiting until it’s too late,” Associate Professor Hurd said.

The research is available here.