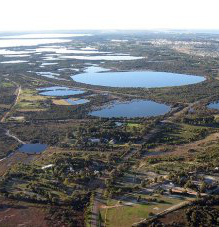 The investigation found that increasing levels of acid in the groundwater around the Dalyup River, Lake Gore and Jacup-Cameron Creek in the Fitzgerald River National Park have been caused by the installation of clearing drains to remove saline groundwater by farmers over the last few decades.

“Because of rising water tables a lot of farming land has turned salty, basically reducing the productivity of the land,” he told ABC reporters.

“So they've put in drains to try and get the saline groundwater away but what that's inadvertently done is increase the amount of acid discharge to the river and caused environmental issues downstream.”

Mr Lillicrap was behind a seven-year-long study that found over 100 kilometres of waterways in the Dalyup area had been permanently acidified.

The high acidity level has taken a toll on biodiversity of the river systems, and must be fixed for animals to survive.

“The normal pH of a river, which is how you measure the level of acidity, is roughly like rainfall or what they call neutral,” he said.

“These metals are toxic or poisonous to the animals that live in the river.

“It's actually quite sad, some areas where the little frogs have come down to the river... and they jump into the acid water and just keel over dead.”

But there could be a way out – as the experts suggest technology developed for the mining industry can help farmers and resource managers clean up the waterways.

“We'll probably have to look at the way farmers can improve productivity on their land and better manage salinity,” he said.

“But in the short term what we can do is put treatment systems developed in the mining industry into the drains to remove some of the acidity before it actually goes out to the environment.

“We had to make sure we got the science right and understand the long-term risks to the river.

“The issues in the Dalyup River represent a broader issue across WA, so this is also occurring in other areas of the Wheatbelt as well.”