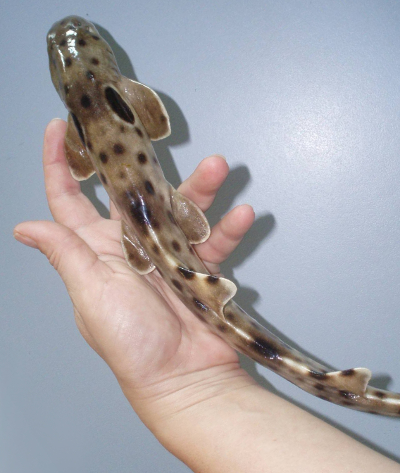 Researchers have made a surprising find about the climate change resilience of sharks.

It appears that a particular kind of shark in shallow, tropical waters around northern Australia is well placed to cope with the warmer and more acidic oceans of the future.

The coming shift in ocean conditions could be disastrous for marine ecosystems, but marine scientist Jodie Rummer has discovered that the tiny epaulette carpet shark is likely to thrive.

Dr Rummer has received a United Nations fellowship for her shark studies, allowing her to expand her work at the world's largest shark sanctuary in French Polynesia.

“The epaulette shark lives in shallow reefs, reef flats, so within the coral in a lot of cases where it can experience dramatic fluctuations [in temperature and oxygen levels],” Dr Rummer told ABC reporters.

“Because of its small size, because it doesn't have a particularly big bite like other sharks do, [so] it uses these habitats for protection.

“It does so very well in terms of low oxygen, it's the best of all sharks that we know.

“It can also tolerate high CO2 conditions as well — levels that we're expecting to occur in our oceans by the end of the century and these sharks are neither physiologically nor behaviourally affected by those levels.”

With the backing of the L'Oreal-UNESCO For Women in Science fellowship, Dr Rummer will expand her research to find out how two other sharks will cope with climate change - sicklefin lemon sharks and black-tip reef sharks.

“I've been working with a team of French scientists that have identified 15 sites around the island of Moorea that the mother sharks come in to pup the babies and they basically release the babies in these shallow areas,” Dr Rummer said.

“That gives us 15 sites around the island where we have access to these baby sharks that are ... about 55 centimetres or so and they're living in these shallow habitats so we can track them.

“We can monitor changes in their blood chemistry, how they're using oxygen, the changes they're making when they venture into warmer temperatures, how fast they're using food, how much energy it takes them to use food and the types of habitats that they prefer to be in ... to start to understand the picture.

The L'Oreal-UNESCO For Women in Science Awards have also been awarded to Australian cognitive neuroscientist Muireann Irish and astronomer Shari Breen.

UNSW research Dr Irish will use the funding to look into the ways that dementia affects cognitive function.

CSIRO’s Dr Shari Breen says she hopes to use her fellowship to investigate the origins of the high mass stars, using a network of international telescopes.