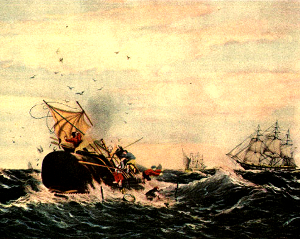 Studies have shown decades after the end of large-scale sperm whaling, their numbers are yet to recover.

With recent good news on the protection of the humpback whale, the study from Macquarie University says toothed whales – such as sperm whales – have not recovered well, despite protection.

“In recent years we’ve seen some really encouraging news for humpback and southern right whales in Australian waters – almost to the extent where you could say they’re no longer endangered,” says lead researcher Robert Harcourt.

“But we can’t let these good news stories blind us to the fact that the other great whales are in real trouble – including the largest predator to have ever existed, Moby Dick himself.”

Published in Endangered Species Research this week, the research investigated the status of mature sperm bulls off Albany, Western Australia.

The sperm whale has a reputation as a predator.

The whale on which Moby Dick was based came from real life reports of an albino sperm whale known as Mocha Dick, whose flukes and breaches caused havoc to ships and sailors.

The species suffered major losses however during Australia’s peak whaling periods, when populations were decimated by 74% between 1955 and 1978.

“To measure the contemporary status of sperm whales off the Western Australia coast we conducted an aerial survey comparable to those done by whaling companies historically,” Dr Harcourt said.

“To our great surprise, despite complete protection since 1978, there is no evidence that sperm whales are recovering.”

The team says overseas sperm whales numbers are not much better, failing to recover anywhere they were heavily exploited.

The study has been published in the journal Endangered Species Research.