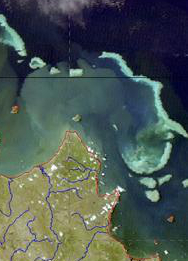 The dredge spoil from the contentious expansion of the Abbot Point Port will be dumped on land, and could even be used to improve the environment in which it rests.

Queensland deputy premier Jeff Seeney says the Government is formalising new plans to deliver “a win for jobs and a win for the environment”, by dumping the same spoil on land.

“What is even more exciting is that this strategy provides an opportunity for nearby wetlands to be preserved and enhanced for the benefits of locals and visitors to North Queensland,” he said.

“We are inviting the local community and environmentalists to work with us to restore freshwater flows to degraded areas of the wetland, expand its area and consider access points for the general public to boost tourism activity in the area.”

Queensland’s Abbot Point Port and Wetland strategy, including provisions for onshore dumping, has been submitted to the Federal Government for approval.

Mr Seeney says he is keen to hear all ideas for what to do with the three million tonnes of silt, sediment and other material.

He said that while he expects members of the environmental community to oppose any kind of development, most Queenslanders will see the new idea as a breakthrough strategy that can offer good alternatives to sea disposal.

According to the current schedule, the dredging is set to start in March 2015.