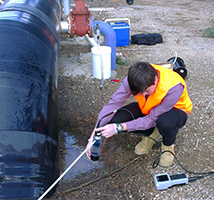 Australian researchers have sought to find out just how clean our recycled water is.

A project by a team from RMIT raises questions about the level of contamination in the source water for aquifer storage and recovery (ASR) schemes.

ASR involves pumping highly treated wastewater into a depleted aquifer to replenish supply and then recovering it when needed.

In a project funded by the American National Ground Water Research and Educational Foundation (NGWREF), RMIT researchers found low levels of artificial sweeteners, detergents, pesticides and pharmaceuticals in the source for an ASR scheme sampled over four months.

Dr Matthew Currell said the chemicals they found were considered to be contaminants of emerging concern (CECs) - chemicals in water that have previously either not been detected or which are now being detected at levels significantly different than expected.

“We don't know what happens to any pollutants that are in the water once they enter the aquifer,” said he said.

“They might still be there once the water is recovered.”

A hydrogeologist by training, Dr Currell teamed up with Dr Oliver Jones, from the School of Applied Sciences, to study an ASR scheme in Melbourne.

Dr Jones said it was one of the first times an ASR scheme had been investigated for CECs.

“While we don't drink recycled water, it is still used as household grey water so you might use it for things like washing the car or your bike or watering the plants and vegetables,” he said.

“ASR has considerable potential in urban water management because water companies don't need to build expensive new surface reservoirs and, since the water is stored underground, there is no loss by evaporation.

“This is particularly attractive in drought-prone areas.”

The full results of the research are in preparation for the journal Groundwater later this year.