Streets packed to keep the tax 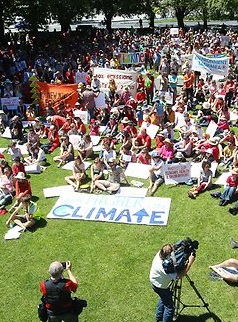 Tens of thousands of Australians took to the streets over the weekend, speaking out about the need to fight climate change with realistic methods.

Much of the concern was focussed on recent moves to repeal the carbon tax, which Prime Minister Tony Abbott says is needlessly increasing electricity bills while not counteracting humanity’s impact on Earth’s climate.

The Prime Minister’s proposed ‘direct action’ approach would be instituted instead of the tax. Direct action involves paying companies to try to reduce their carbon emissions, planting trees and sequestering excess carbon in soil.

An independent monitor of the likely outcomes from the direct action plan says it is a backward step.

The Climate Action Tracker claims direct action will increase Australia's emissions by 12 per cent in 2020, instead of reducing them by five per cent from levels in 2000 as per its own target.

Mr Abbott has said that residents will be the immediate benefactors of his plan to repeal the carbon tax, promising that electricity bills would drop as soon as it is removed.

“Australia is going backwards, the rest of the world is going forwards accepting that climate change is real and accepting that we must act,” Deputy Opposition leader Tanya Plibersek told some 10,000 protestors .

Cheaper electricity may be enough for some, but many of the thousands of protestors at the weekend said the long-term effects of Australia’s reliance on coal-fired power and mining exports will be much more expensive than having to fork out a little bit more to keep the lights on.