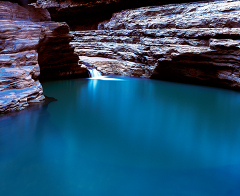 Typically associated with arid, dry desert conditions, Western Australia’s Pilbara region is actually home to a unique set of aquatic life – the topic of a new study by Murdoch University.

The project will see the lives of Australia's only three species of cave fish; mangrove jacks, Fortescue grunters and spangled perch captured in glorious high-definition for a new video species guide and short documentary.

Dr David Morgan from Murdoch University's Freshwater Fish Health Unit and his team is preparing the region for its close-up, saying they already have a lot of the shots they need.

“We're focussing on the inland fishes of the Pilbara or Indian Ocean Drainage Division, which encompasses a region from about Dongara to the De Grey River in the north,” Dr Morgan said.

“We filmed in the Fortescue and the Gascoyne in the last couple of weeks and we're looking at doing a Murchison River trip in the new year and also looking at doing some filming of cave fish in Exmouth.

He says the Pilbara’s fish populations have avoided the fate of many of Australia’s other local aquatic life forms.

“The Fortescue River is a really important catchment. It's quite diverse, there's about 14 or 15 species of fish,” he said.

“But then south of there, there are a number of invasive species that have gotten in. Most of the Pilbara is actually free from any introduced species, which is pretty unusual.

“These oases in the desert are really important for maintaining species, some of which have been there for millions of years.”

The documentary will tour towns in the region when it is completed sometime next year. Dr Morgan says there are still few angles and species yet to commit to film.

“The elusive short finned Indian eel is something that we really still need to capture on film, we're not having much luck,” he said.

“We have caught them previously but as always, whenever you catch one you never have your camera!”