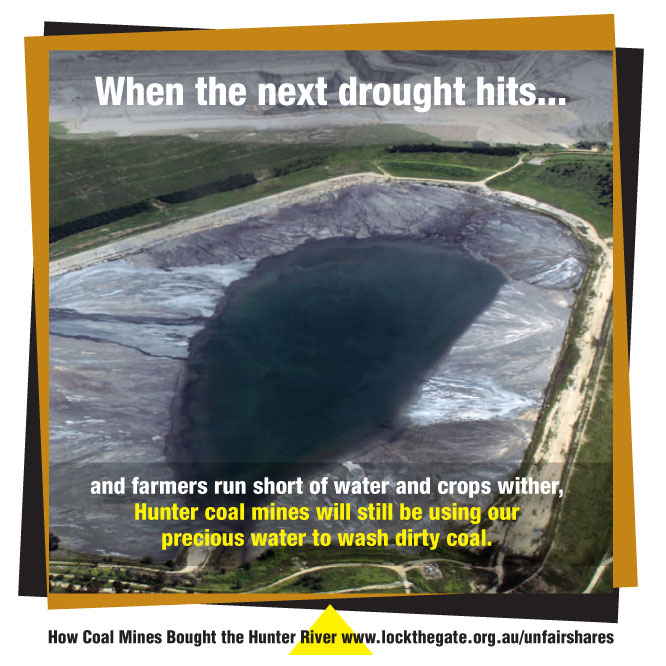 A report from an anti-coal community environment group says mines in the Hunter Valley use too much water.

The report claims strict new rules should be imposed on NSW mining firms “to restore the balance and ensure that the increasing dominance of the coal industry does not push agriculture and horticulture beyond the brink and out of the Hunter altogether”.

The report says mines in the Hunter use too much water, but the figures show it consumed 88.5 billion litres last year of a total 143 billion litre allocation.

It predicts the usage will increase to 133 billion if new and proposed mines are developed.

Lock the Gate says the proportions are off, as mines hold 55 per cent share of all “high security” shares in the Hunter River.

“Miners have effectively driven up the price of water in the Valley, making it the most expensive water in NSW with Water Access Licences consistently traded at over $2,000 per megalitre,” the report states.

Lock the Gate’s Hunter Regional Coordinator Steve Phillips said coal mines in the region were responsible for increased salinity, and put other water users in the region at risk of running salty and dry.

“Coal mining is increasing salinity in the region by mining coal seams in saline aquifers and then discharging mine-affected water into the rivers and streams,” Phillips said.

Phillips said the volume of entitlements owned by the mines equated to more than a quarter of the total amount of water used by householders, industry and businesses across the Sydney region last year.

“While householders are carefully conserving water through shorter showers and farmers are destocking their land to cope with drought, coal mines are using huge amounts of clean water to wash coal, and are cutting open aquifers, drawing down riverbeds and leaving behind huge open voids that will continue impacting on groundwater for generations to come, long after the coal has been exhausted,” he said.

“The recommendations of this report are sorely needed to restore balance and ensure that the increasing dominance of the coal industry does not push agriculture and horticulture beyond the brink and out of the Hunter altogether.”

Recommendations include no-go zones to exclude coal mining within two kilometres of productive groundwater sources and agricultural land. It suggest a freeze on approvals for coal mines that will increase salinity in Hunter water sources, and pushed for rehabilitation of the deep open cut voids left when mining has ceased.