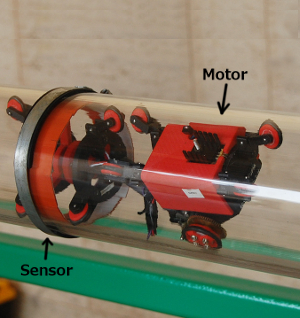 A new robot could save millions of dollars across energy, water and gas pipe networks.

Researchers have developed a small, self-propelled robotic system which can swiftly and accurately detect gas leaks, by running up and down pipelines to monitor pressure changes.

In a recent research paper, engineers from MIT and King Fahd University of Petroleum and Minerals (KFUPM) in Saudi Arabia say the system can detect leaks in gas pipes, water pipes or petroleum pipelines even at low pressures and just a few millimetres in size.

Current methods for detecting cracks and leaks usually involve pressure sensors, above-ground acoustic sensors (which pick up vibrations and dim sounds from leaks), video cameras or some combination of the three.

Each of these has its drawbacks, which the new device hopes to avoid.

The pip-running robot is made in two parts - a compact module with wheels to traverse the length of pipes, combined with a pressure sensor which forms a seal around the pipe.

When the device comes across a leak, the pressure-sensitive membranes are distorted by the change in pressure. This triggers an alert to be sent to the operator.

The pipe-bot can traverse a tube at about five kilometres per hour, but the designers say this limit comes from the propulsion system, and could easily be made more rapid.

The membranes can detect leaks just a tenth or even a twentieth of the size of those that could be found by previous methods.

“This technology allows for an unambiguous and reliable sensing of very small leaks that often go undetected for long periods of time,” said Kamal Youcef-Toumi, a professor of mechanical engineering at MIT and a co-author of the research paper.

The engineers behind the 'bot say they are now moving on to real-world field tests with a number of gas and water companies.