Talks see how to save sea-cow 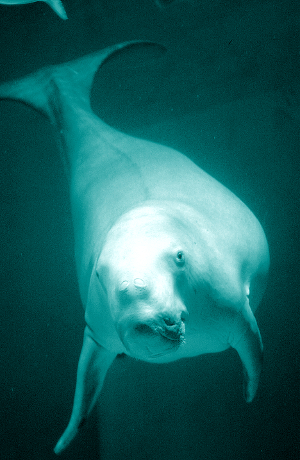 The Global Environment Facility may provide funding for one of the Pacific Ocean’s most valued inhabitants.

A funding program is being discussed which would set up a $5.8 million program to conserve dugongs and seagrass.

Mike Donoghue, threatened and migratory species advisor with the Secretariat of the Pacific Regional Environment Program (SPREP), told Radio Australia that funds could be used in near-countless ways.

He says everything from climate change to seagrass, boats and nets are making times tough for the dugong.

“Seagrass is particularly threatened by climate change in the oceans because it's very sensitive to acidification so as more carbon dioxide goes into the water and the ocean Ph drops and it becomes more acidic, it's possible that seagrass will be particularly impacted,” he said.

“Also most of the great seagrass meadows are in coastal areas so they're particularly susceptible to silt deposition [and] inappropriate coastal development.

“Dugongs are very slow swimming, [they're] not particularly great at holding their breath so they're very vulnerable.

“They're particularly susceptible to a whole bunch of human-induced threats and it's a big concern for SPREP to try and encourage the countries that have dugong in this region to manage and maintain their populations.

The plan about to be put before the GEF would give just under a million dollars to dugongs in the Pacific.

“That's still a huge increase than before so if we are able to mobilise those sort of funds, if we can get some partners and donors to realise the critical state that dugong is in, then it does provide us with an opportunity to protect and conserve the remaining population for future generations,” Mr Donoghue said.

“Probably the most significant part about this is that because they're a very coastal species, often in areas where people live, the key thing about this program will be to encourage communities in Papua New Guinea, in New Caledonia, Palau, Vanuatu and Solomon Islands to take responsibility for looking after these animals [and] to encourage them by providing some funding support.

“Perhaps also to encourage people to come and visit them and to generate revenue for those communities through ecotourism.”