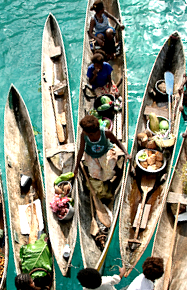 One regional capital and its residents will have to move, as rising sea levels bring oceanfront views too close for comfort.

The town of Taro, the provincial capital of the Choiseul Province in the Solomon Islands, will be relocated to a mainland centre due to coastal hazards and the risks of rising sea levels.

Planners have been brought in to work on a comprehensive new climate change adaptation plan to move the town of Taro and its 800 residents.

Experts at the University of Queensland are working with British Maritime Technologies WBM (BMT WBM) and Buckley Vann town planners to orchestrate the upheaval.

UQ Engineering professor Tom Baldock says the community of Taro is under significant risk from tsunamis and ocean storms.

“As the capital of the Choiseul Province, Taro is less than two metres above sea level, presenting a significant risk to the community, which will be compounded in the future with climate change and the resulting rise in sea levels,” he said.

The relocation of the capital, including schools, hospitals and businesses, will take many decades to complete, and the adaptation plan also aims to increase the community’s resilience to coastal hazards, such as the preparation of a tsunami response plan.

A specialist team of engineers, scientists and town planners is consulting extensively with Choiseul Bay communities to develop a vision and future town layout that reflects the needs and values of the local Lauru people.

“The project followed the ways of our traditions – talking with people, listening to people, and reflecting the desires of the people,” Mr Kiloe said.