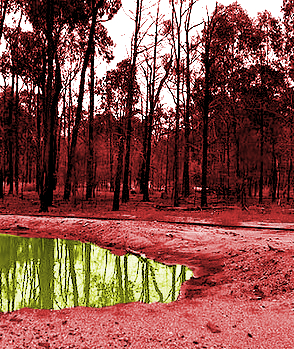 The operators of a large CSG exploration project are getting around to shutting down their leaking storage pond, after being fined several months ago.

Energy firm Santos was fined $1,500 for a pollution incident which saw the leaking pond’s contents spill into the Pilliga State Forest in NSW.

The fine came after a self-reported finding of elevated levels of arsenic, lead, and uranium in groundwater samples.

But the pond will now be decommissioned, with the company set to drain it in the next few weeks.

It is a response which has taken the company months to get around to, which some say shows their level of interest in dealing with clear negative environmental impacts.

The pond will be closed as Santos brings its “state of the art” Leewood treatment facility online, with the contaminated water from Bibblewindi storage pond 3 being piped 17 kilometres to the new plant.

The new facility has a capacity of 300 megalitres in each of two ponds, both of which are broken down into two cells.

The exploration, water storage and treatment are all in support of Santos’ proposed Narrabri gas project, which it hopes will enable it to sink its teeth into gas-laden central NSW.

The company expects to have 850 wells in the ground, which will produce 1.5 gigalitres of similarly-toxic water from coal seams each year.

The project will reportedly produce around 50 tonnes of salt in its Narrabri CSG operations every day.

Santos says it has no firm plans for the two truckloads of salt every day, but it will likely be bound for landfill in Newcastle.

The company is putting together its Environmental Impact Statement for the project, which it says will be lodged with the NSW Government Environment Protection Authority by the end of June.