WA in dispute on Roebuck leaks 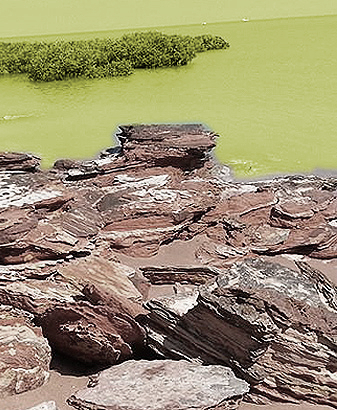 Experts are in dispute over the cause of elevated nitrogen levels in the Roebuck Bay Marine Park.

In 2014, Water Corporation of WA’s then-regional business manager Peter McAllister announced that the older of Broome's two sewage treatment plants was leaking 90 megalitres each year into Roebuck Bay, near Broome.

The area has recently been declared a marine park due to its high biological diversity.

In 2015, WA’s Department of Environment Regulation (DER) said the Broome South wastewater treatment plant was contaminated, and would require remediation, but it now says new research shows that the sewage treatment plant is not to blame for elevated nitrogen and the subsequent toxic blue-green algal blooms.

But that modelling study was based on false assumptions, according to the Water Corporation.

“It's isotopic, it's state-of-the-art technology. It's used worldwide, it's not necessarily new,” Mr Trolio said.

“This is indicating that nitrogen itself is not originating from wastewater.”

“Scientists other than those [who] have done the work that the corporation has commissioned, might actually come up with a different interpretation of the results they've found.

“I think it would be a very, very long bow to draw to say that none of those nutrients from the wastewater treatment plant, or the disposal sites, are not ending up in Roebuck Bay,” Dr Vogwill said.

Mr Trolio said that even though it does not believe the treatment plant is contaminating Roebuck Bay, the Water Corporation is being proactive.

“We're fast-tracking a $7 million project to fully line an unused holding pond and reduce our footprint from eight ponds to four ponds,” he said.

“More than one [water corporation] staff member has said unequivocally that the tertiary and secondary ponds, and the holding ponds, are seeping, and given the amount,” Ms Curran told reporters.

“You can't come back two years later and say to the community that only one holding pond is just seeping a little bit.

“I think it's very, very difficult for the community to have trust when that's happened.”