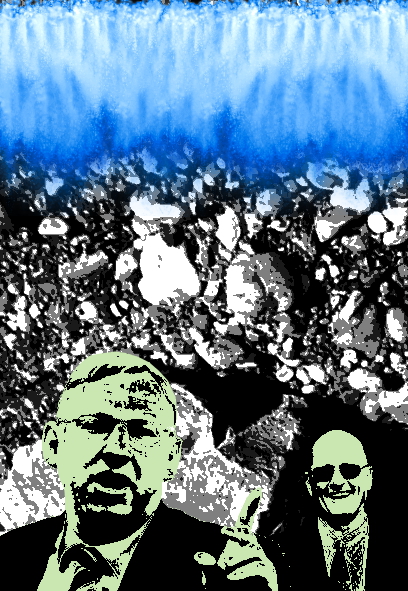 Showing the extreme mine-friendliness of the Queensland Government, a law has been changed to prevent investigation of a controversial quarrying practice.

A legal adjustment has been slipped into bigger changes to Queensland’s Water Act, retrospectively legalising watercourse or ‘in-stream’ quarrying.

Mining riverbeds for gravel in Queensland “is lawful, and is taken to have always been lawful”, according to the newly-amended Water Act.

But the timing of the change has raised many questions, as it came just days before a major Liberal Party donor was to be investigated after years of complaints.

It means Karreman Quarries will be able to continue digging up a section of the Upper Brisbane River, after the planned investigation of its unlawful sand and gravel extraction was called off.

The $15 million-per-year Karreman operations are chiefly focused on gravel, which is used as an ingredient in concrete.

The quarry is owned by businessman Dick Karreman, who has given at least $75,000 to the LNP in recent years.

Opponents say it shows that in the face of Queensland’s resource development, the law is a mere inconvenience.

Local landowner Neil O'Connor says the change means Karreman can continue destroying his land for at least another five years.

Mr O’Connor owns property on the riverbank upstream from the Karreman Quarry, and says that the downstream quarrying is causes mass-erosion of the banks on his property, depriving him of agricultural land and sending buried resources downstream to the quarry.

The farmer and his neighbours have poured their savings into attempts to prevent the erosion, but he says he has lost acres of land regardless.

Locals have been campaigning against the practice for twenty years.

“They've lost many hundreds of thousands, if not millions of dollars worth of land that they can't get back.

“It's basically gone, it's a resource that they've lost.

In addition, the Institute says the sand and gravel extraction flushes excess sediment and nutrients into the main source of drinking water for Brisbane. This increases the costs of water treatment by millions of dollars per year, as well as reducing the lake's capacity.

Despite the Department of Natural Resources and Mines previously setting out a 20,000 tonne annual limit, and current estimates that 100,000 to 150,000 tonnes are now being removed, Queensland's Water Act has been amended to allow the practice to become more widespread.

The situation has sparked criticism and intrigue from all sides, with environmentalists, the Greens and the Queensland Opposition all saying the legal adjustment was ushered-in in secret, not debated or even mentioned before it could be set in stone.

The Queensland Natural Resources has issued a statement saying the LNP always planned to break down reforms relating to river quarrying.