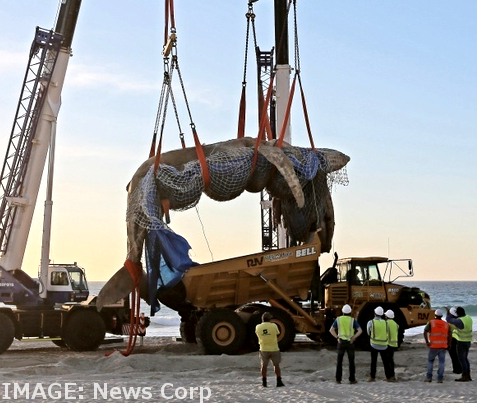 The story of a beached whale, an expensive clean-up and an angry council has taken a bizarre turn.

A battle is brewing between WA’s City of Stirling and the state’s Fisheries Department, over who should foot the bill for the cleanup of a whale carcass.

But it appears that Fisheries is using a technicality to avoid the fee.

The marine giant washed up on shore in the Perth suburb of Scarborough on November 3, kicking up a stink until the City of Stirling paid to have it removed.

Close to $200,000 was spent on heavy moving equipment, transport, traffic management, tip fees and security, but now the State Government is refusing to help out.

In its latest defence, the Department of Fisheries appears to be looking for a loophole.

“They are not going to foot the bill, because it's a mammal not a fish,” City of Stirling Mayor Giovanni Italiano told radio interviewers this week.

“They believe it's not in their jurisdiction,” he said.

Cr Italiano says the State Government could have had dead whale towed out to sea days before it reached the beach.

A spokesperson for the Minister for Fisheries has told the ABC that the Fish Resources Management Act 1994 “does not envisage the Department of Fisheries managing whales, whether they are alive or dead”.

If this is the department’s genuine stance on the issue, it may prove extremely difficult to maintain under even light scrutiny.

On the WA Department of Fisheries’ website, a range of campaigns and duties quite clearly relate to aquatic life-forms other than fish.

The department manages mud crabs (crustaceans), pearl oysters and octopi (both molluscs), abalone (snails), as well as algae and bacteria, seaweed and the water in which these things live.

Clarification is being sought from the department over whether it will stand by its excuse.

“We pay the Government $26.3 million for fire and emergencies services levies, and this was an emergency,” Cr Italiano said.

The council says if another whale carcass turns up on its beaches, it will not deal with the clean up.