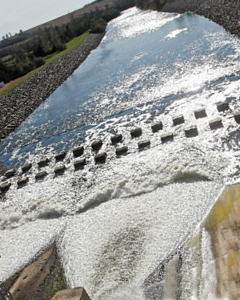 Burrendong Dam has gone from 2 per cent full during a drought in 2020 to over 100 per cent since last September.

With the La Niña weather system forecast to continue, a wet winter is set to follow one of the wettest years in decades.

Dam managers at Water NSW are watching for potential flooding caused by yet more rain falling in the already full dams, high rivers, and saturated catchments.

“There have been repeated releases but that water has been replaced almost immediately by the next rain event,” Water NSW spokesperson Tony Webber says.

“That's a pattern we've been in for many months now.

“In the case of Burrendong in particular, which is still up around 115 per cent capacity, some large releases are taking place to pull that storage down. The target figure is 105 per cent at this stage.”

The authority is working to capture and release thousands of gigalitres of water without causing flooding.

“Some of these dams have released far more in volume than they actually hold and it's been a pattern of making releases in readiness for the next rain event,” Mr Webber said.

“You need to find those opportunities when there's space in the river to make releases without having an adverse impact downstream.

“Obviously, if you're going to have tributary flows that are also generated by those rain events, you don't want to add to that flow with large releases from the dam. So it really is a balancing act.

“The flooding that has occurred has been greatly reduced due to large inflows from the dam's catchment being, if not captured, at least held back to allow those tributaries downstream to recede.

“Numerous flood events have been diffused altogether because that water has been captured in the dam and converted into water security for the future.”

In the state’s west, the entire stretch of the Barwon-Darling River to Menindee Lakes iwill soon receive an enormous volume of water from Queensland.

“There's another huge flow making its way down the river now, we anticipate anything up to 1200 gigalitres will be received into the lakes by the end of July,” Mr Webber said.

“That's got to make its way past those towns on the Barwon Darling — Brewarrina, Bourke, Louth, Tilpa, Wilcannia — and then be passed through Menindee Lakes into the Lower Darling.

“That'll be the second major in-flow event we've had in the last six months.”

But still, operators see the benefit of the massive flows.

“This is an extraordinary turnaround on the years of drought,” Mr Webber said.

“This is probably the best water security situation we've had since the 1990s.

“Across regional New South Wales and Western New South Wales while there's been some hardship and some inconvenience the return to exceptional water security is a much-needed relief.

“After the intense hardship of the drought years, to have all our major supply dams at or about capacity to see the rivers running again, communities assured of town water supply — it's a wonderful turnaround.”